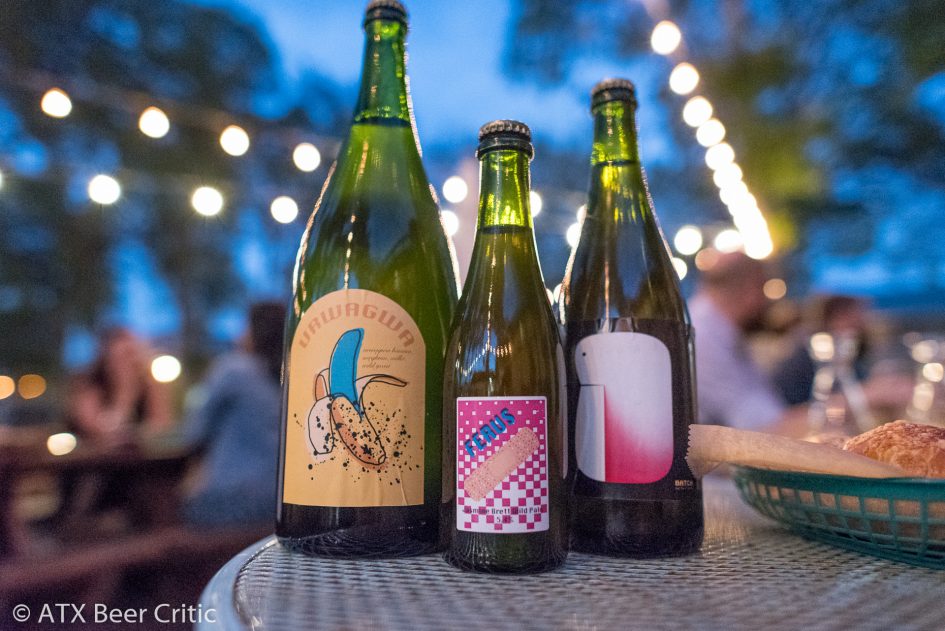 The brewery will be housed in a newly built building adjacent to the existing parking lot. Leading the brewing at Batch Brewery is Head Brewer John Snyder and Heath Shuford, who will be spearheading the IPA program. Batch Brewery focuses on table beers, IPAs, barrel-aged sours, culinary beers, and sour IPA culinary table beers.

Designed by Josh and Laura Lit, the Brewery is split into two sides—the clean brewing room and the funky barrel room (aka The BugRoom). The BugRoom will be stocked with barrels, puncheons, old stainless steel drums, and any other cool containers they can age beer in. While the area won’t be normally open to customers, they plan to host events in the space for club members.

Pictured here is a fruit cap of grapes on top of a sour beer currently fermenting in one of the old Coppertank fermentors. John mentions it will take some time for the BugRoom to reach full production. They’ll be supplementing with a healthy amount of clean beer releases to start. Those who purchased into the bottle membership can expect to see the first release this January.

This weekend, you can expect to find 7 beers available to try. I was able to have a sneak preview of a few:

B Y N – This is a table beer (low ABV), brewed with kveik yeast. Rounded out with a pineapple addition and dry hopping, this beer has lots of flavor. Horindal Kveik strain lends a huge citrus and pineapple punch. A light and fluffy mouthfeel with a nice tartness. This beer finishes dry and falls of the palate quickly. Probably my favorite of the evening. Interestingly, it’s actually a second runnings beer, made from the same grist as the IPA.

Cottonmouth DDH Baustin – Made with Citra, Columbus and Idaho 7, this IPA features late addition to pull out . Very citrus forward, with some pine and mango notes. Nice and dry with a bit of green vegetal hop character. A good bitterness places this as a nice west coast, NEIPA hybrid.

Ha Ha Saison – This was a unique saison. Using a wild caught strain from Community Cultures Yeast Lab, it fermented very dry (91% attenuation). Two types of rye malt used here bring a nice earthy and black pepper character. Some mustiness and green pepper with a touch of sulfur are present too. There’s a nice pithy note on the finish like you get in certain gueze.

SJÖFEN – This was a crowd favorite. With 3lb per gallon of strawberries, they jumped out on the nose with a nice creamy sweetness. The Kviek yeast gives a touch of citrus, and dries the beer out well. Low bitterness with a dry quick finish and a touch of astringency. A well balanced fruit beer.

Ferus Flower – Wild jasmine pale ale. I didn’t try a sample of this one.

Galaxy collide – You may have gotten to try a few variants of this at Batch’s 1 year anniversary. The Cabernet grapes come through well on the aroma and taste. The hibiscus is powerful but blends well with the acidity. Finishes very dry which brings out the vanilla. A bit of perceived fruit sweetness.

Urwagwa – This is my first time trying this traditional African Banana Beer. Smokey phenols jump out immediately. Jon says that this came from the banana-skin-yeast fermentation, and no smoked malt was added. I’d describe it as a banana fosters covered in scotch. Finish is peaty a bit thinner towards the end with some iodine. Banana flavor and aroma is nice. Low hop and bitterness. I could see this being a polarizing beer for some. Bottles will be available to purchase.

Overall it was an impressive first showing of beers. I’m excited to see what the future holds for Batch Brewing.