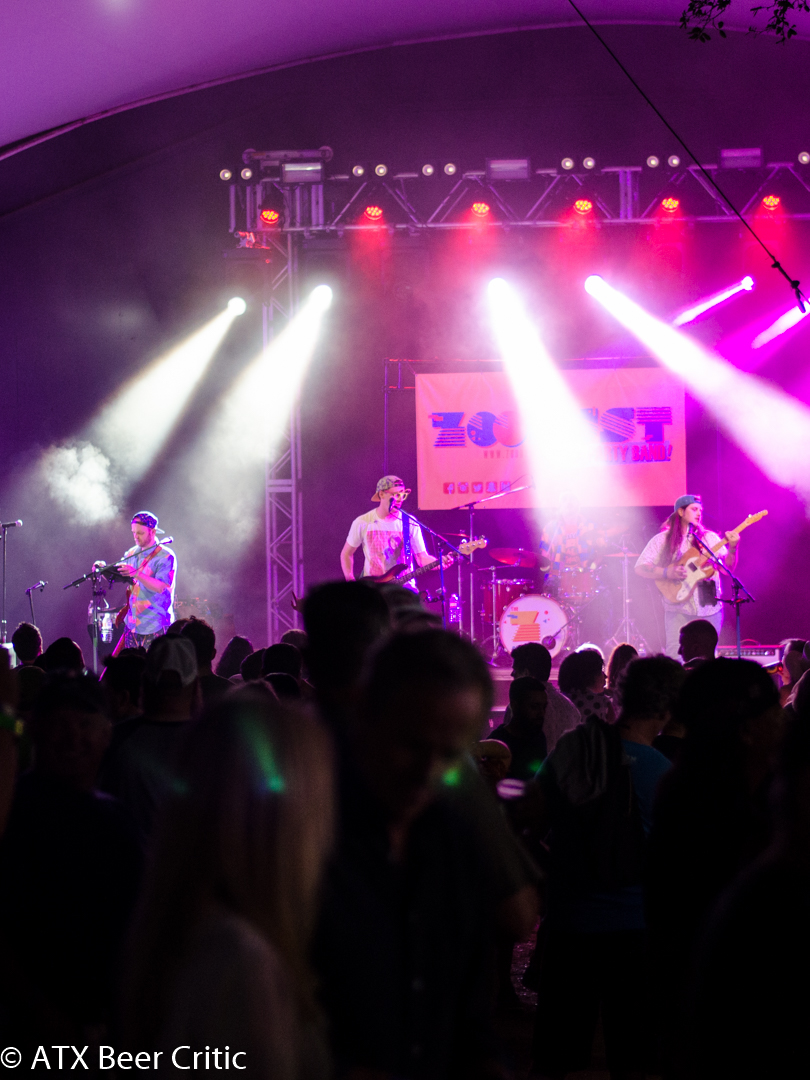 In addition to doing BJCP style reviews, I thought it would be interesting to post my opinion and do a recap of some of the beer festivals and events that pass through Austin.  I was able to acquire a press pass (free) to Austin Beer and Music Festival at Stubb’s Amphitheater Saturday March 31st.  Due to some day job out-of-town travel, it’s taken me a little time to get around to writing up a recap.

Tickets to the event were $35 for general admission, or $50 for VIP.  VIP tickets were billed as an hour early entry, a VIP area, and a commemorative cup.  With VIP admission starting at 6PM, I figured I should arrive a bit early since people tend to line up for these things.  Due to VIP tickets being available on groupon for $20, I figured they might have oversold the early entry. 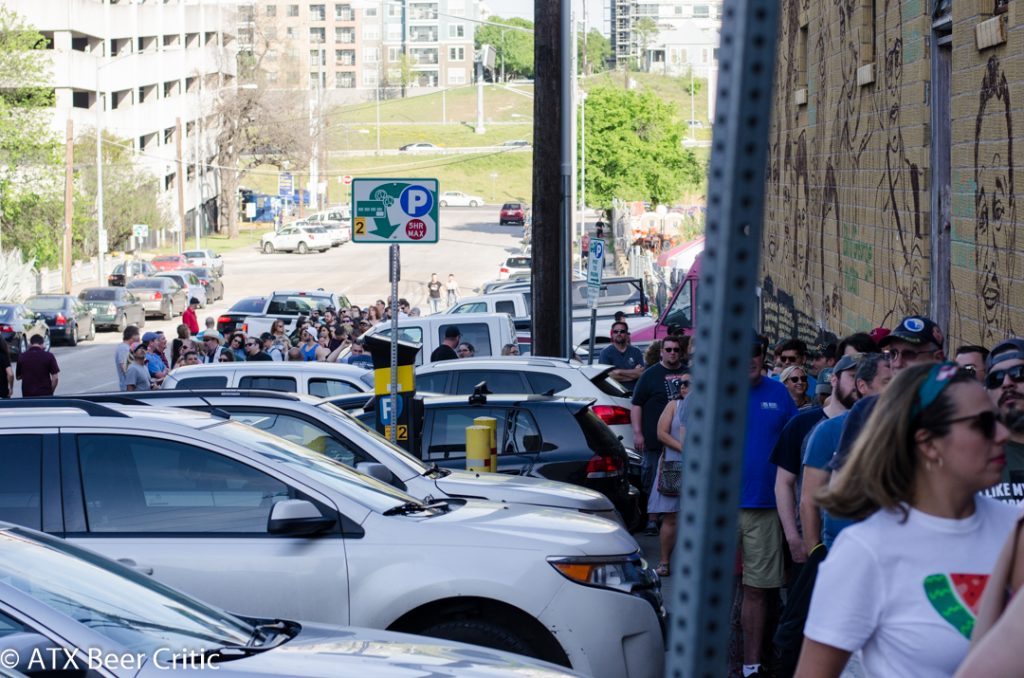 After being harassed by a homeless man to not touch the bread loaf he set out for pigeons, I arrived to see the VIP line wrapping around the block and down 9th st.  After waiting about 15 minutes, the coordinators began letting in attendees probably to avoid a much longer line situation.

I was actually able to get in quickly, around 5:50 PM.  As usual for Stubb’s there was a security wanding, where they pretended to complain about my camera.  I had overhead a few people being confused about there being a separate will-call window for groupon entry.

I was handed what looked like a 3-4oz plastic party cup, and a business card sized Beer Tasting card numbered up to 30.   A lot of VIP attendees were dropping sarcasm bombs about the “commemorative cup”. 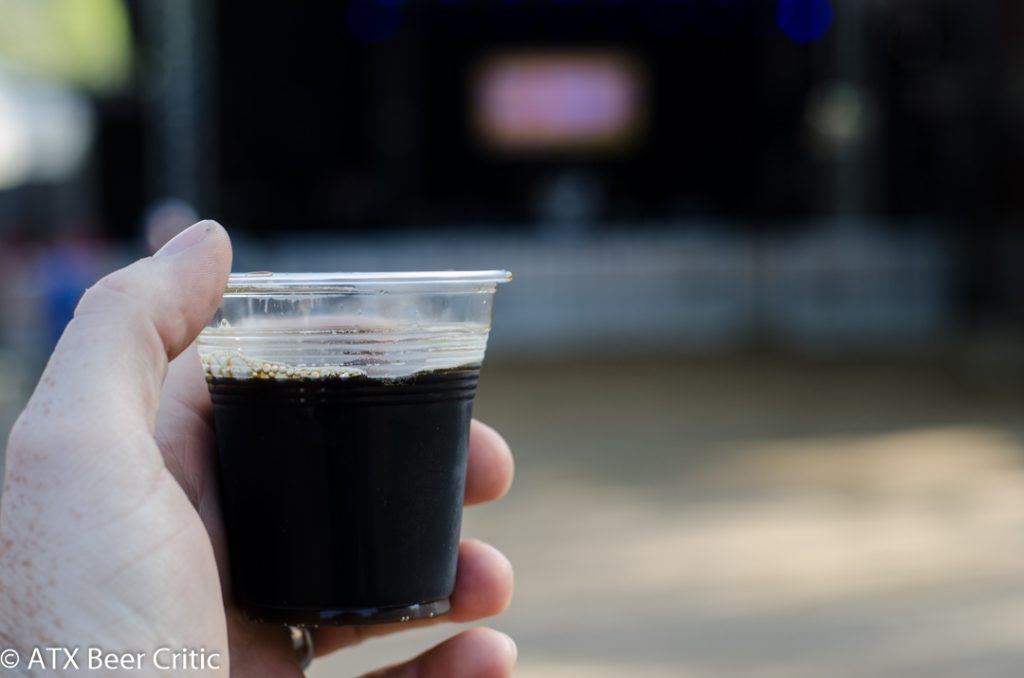 I was surprised to notice that most people were walking around with about 3oz pours.  Since TABC only allows 32oz  of beer to be “sold” with event tickets, I’m sure these samples were billed as 1oz pours to adhere to that.  The servers definitely did not. 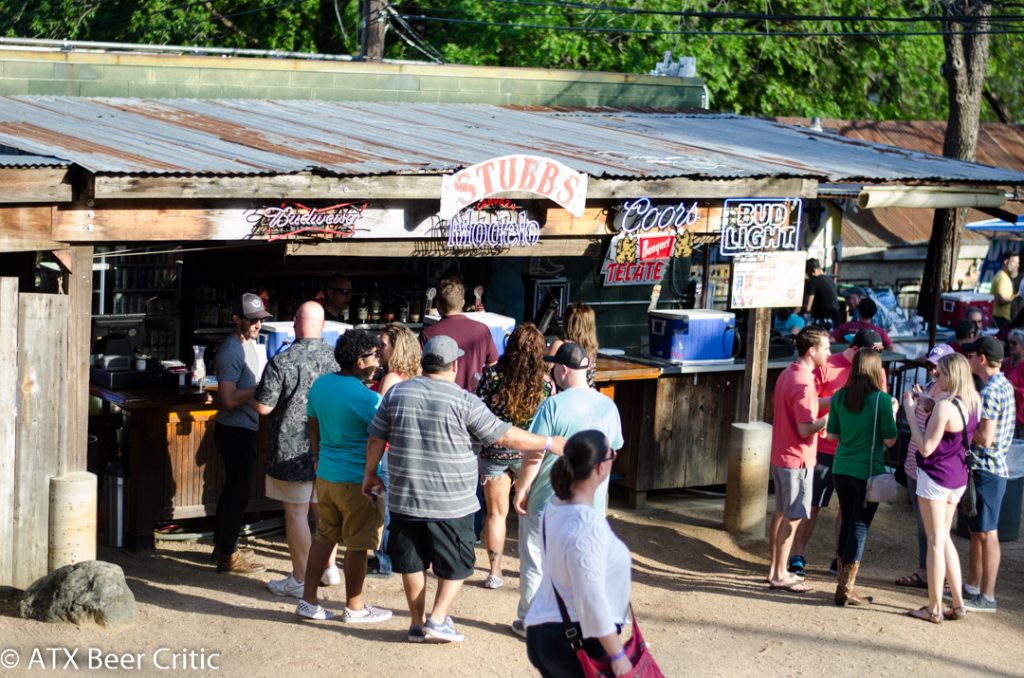 Surprisingly with the early line, there was plenty of room in the venue at 6 PM.  The main amphitheatre area had jockey boxes set up in the concessions area lining the perimeter.   According to the back of the tasting card, there were separate areas also serving beer.  I quickly grabbed a pour here, and went to scout the other areas. 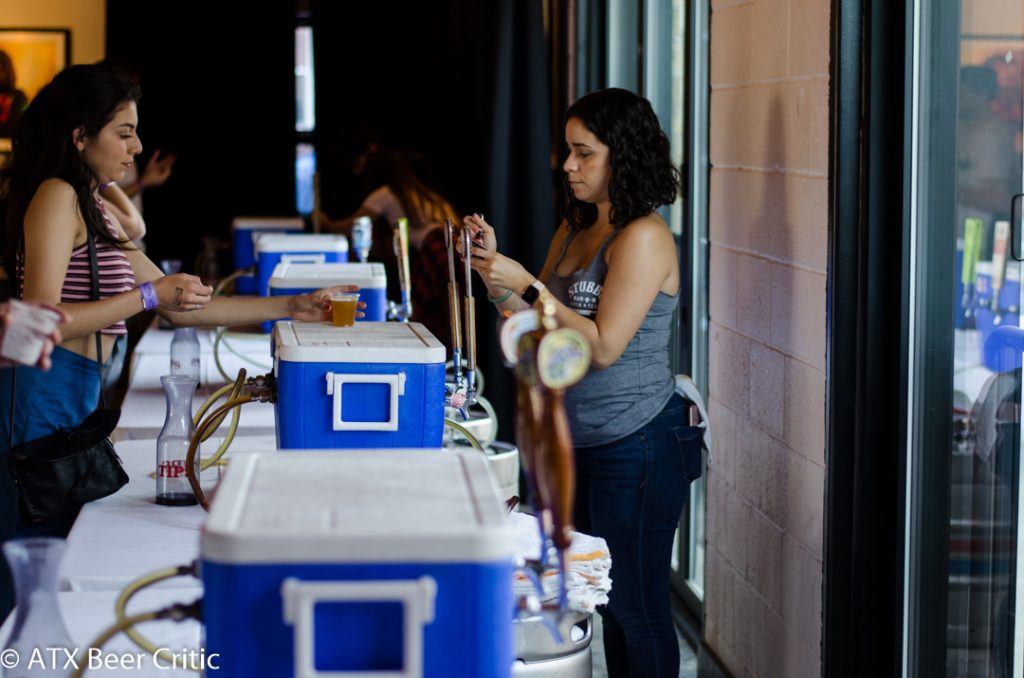 A small building to the North of the property housed about 8 breweries.  According to the card, Brash, St. Arnold, South Austin, and Alpine should have been present, but were missing.  The last two were obvious absences.  They must have printed the cards way too far in advance.  The lines at this time were pretty short, so I made sure to try some Cigar City, which I hadn’t had since it arrived to Austin.  The Jai Alai keg had been brewed at Oskar Blues. 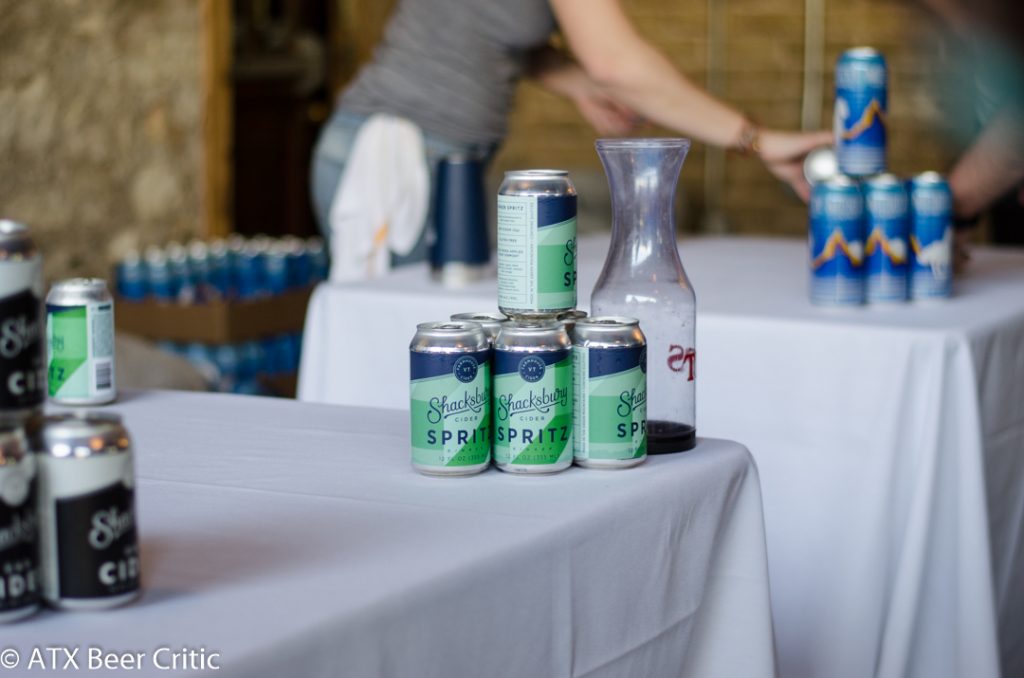 Next, I made my way up to the balcony which overlooked the stage, there were 4 different tables each pouring cans.  I wasn’t feeling ciders today, so I gave Montucky Cold Snack another chance.  Lots of acetaldehyde like the last time I had it.  I also tried Anderson Valley’s IPA which isn’t worth grabbing over any local IPAs. 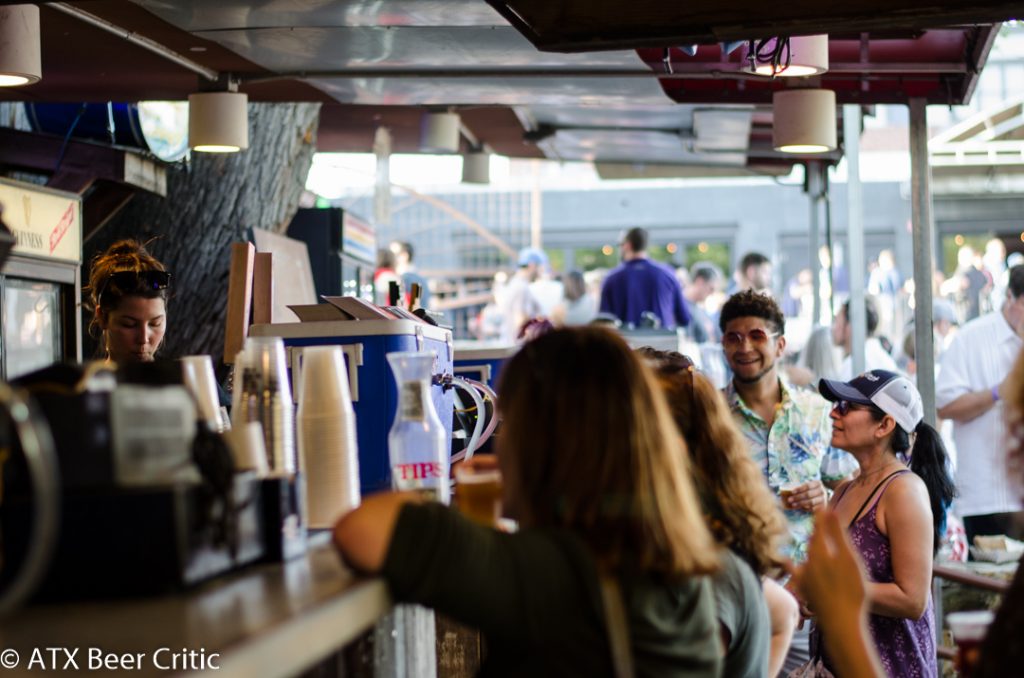 Making my way back down to the main amphitheater, I hit up a few perimeter breweries since lines were still relatively short.  I had a couple decent lagers from Franconia, and some old standbys from NXNW and Black Star.  After overhearing a few more jokes about the tasting cups, I was getting a bit confused because it seemed the whole “Back Lot” section was nowhere to be found.  That’s where some of the new breweries were located, which I wanted to try. 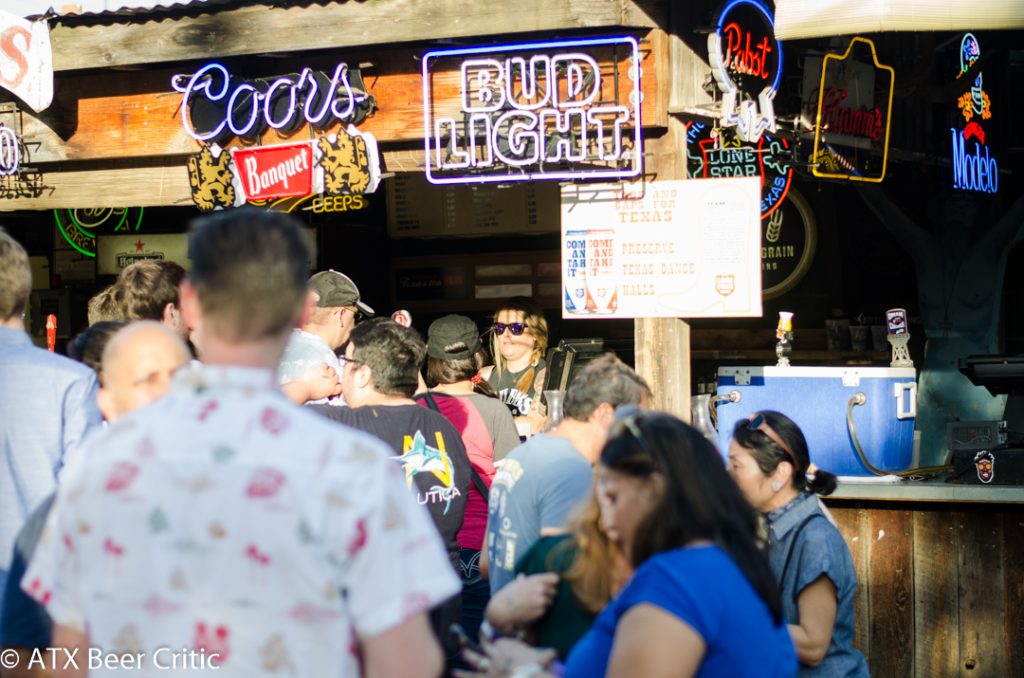 As 6:45 rolled around, lines were getting noticeably deeper.  I could feel the impending doom of GA approaching.  While most breweries were being poured by volunteers, there were a couple brewers and sales reps present.  I avoided trying San Gabriel River beers due to disgusting faces of people leaving their booth.  Even though their label art may look like it was done using MS Word in the late 90s, I did give Suds Monkey a try.  Their porter and IPA were both better than average, probably warranting a trip out to their place. 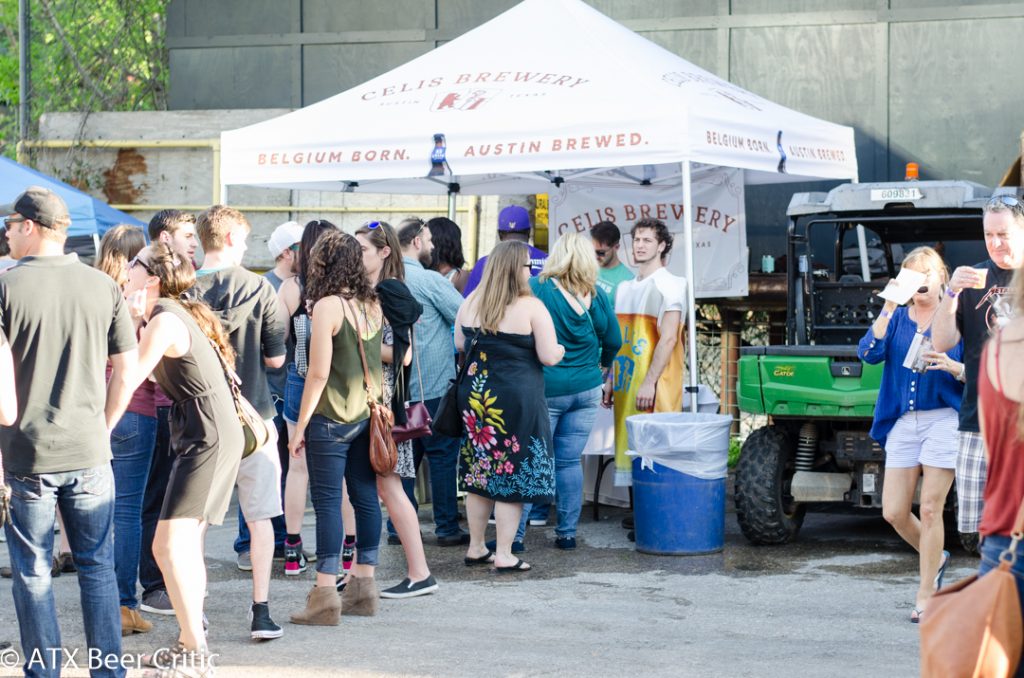 As 7 PM rolled around, I finally located the last brewery area.  Walking past the porta potty area in the back, I stumbled upon the “Back Lot” and some good sized lines.  This is the NE parking lot adjacent to Stubb’s.  There were around 12-14 breweries set up each with a 10 minute line.  I chose a few of the shorter lines, and revisited a few known beers because I was … thirsty. 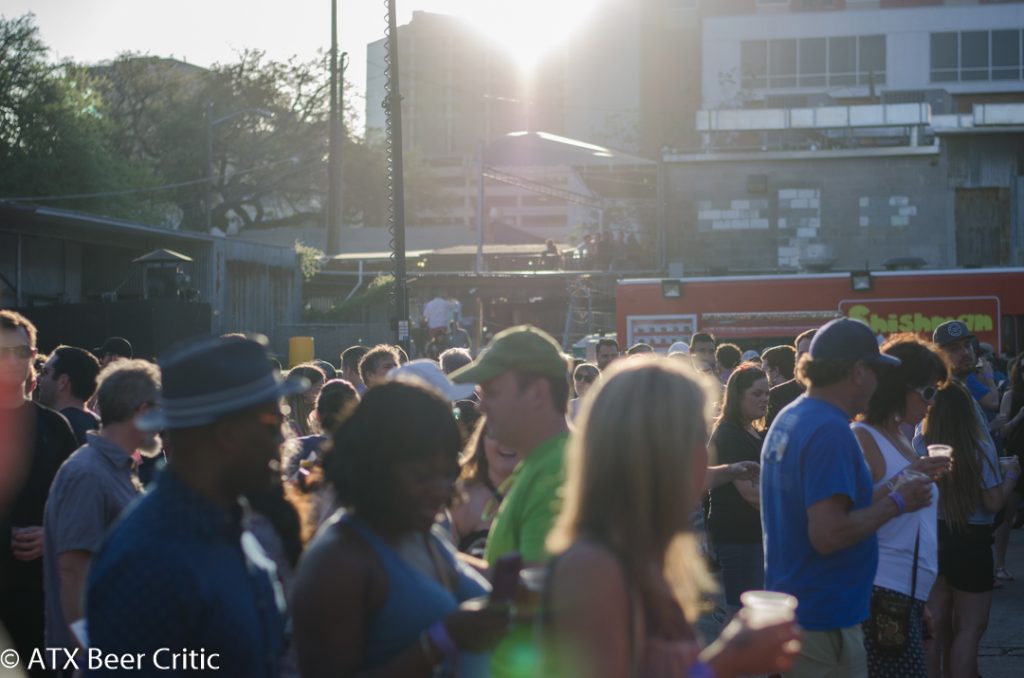 GA was well on it’s way and lines were approaching 20 minutes.  They were so long that they would span the entire width, starting at the tent opposite.  I endured and queued up for a few of the new breweries.  I first sampled Frontyard Brewing.  Their Belgian Pale was great, and I enjoyed their Rye IPA as well.  Really strong showing for such a new place. 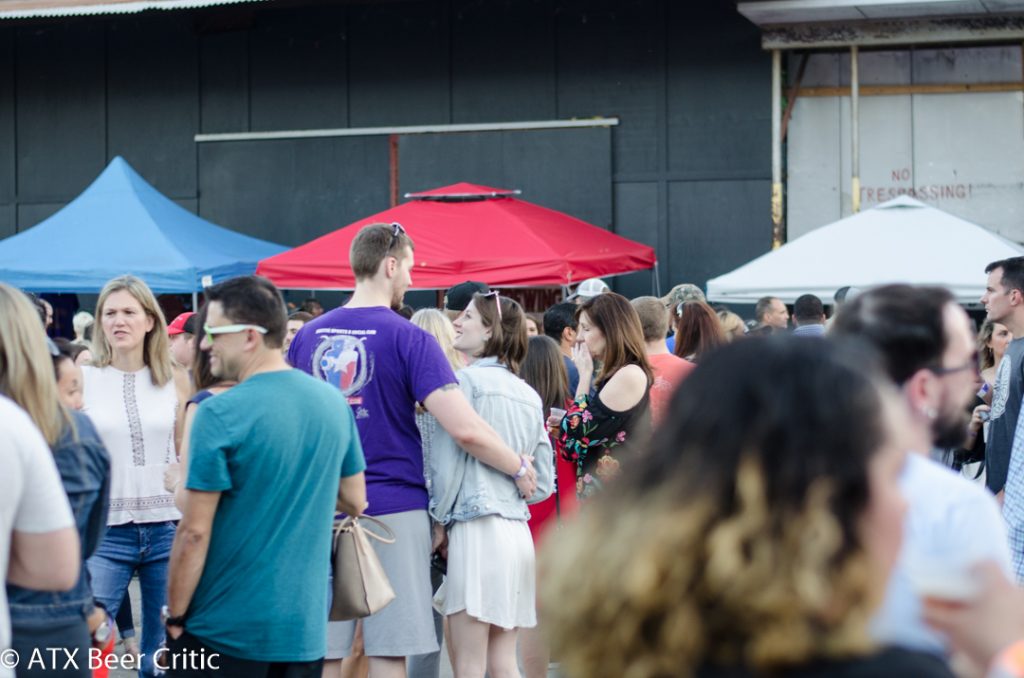 20 minutes later I was able to get to Caracara brewing.  Another strong showing, the Citrus Wheat was probably my new-beer-of-the-night.  Definitely worth hitting up when on a Lockhart BBQ pilgrimage. 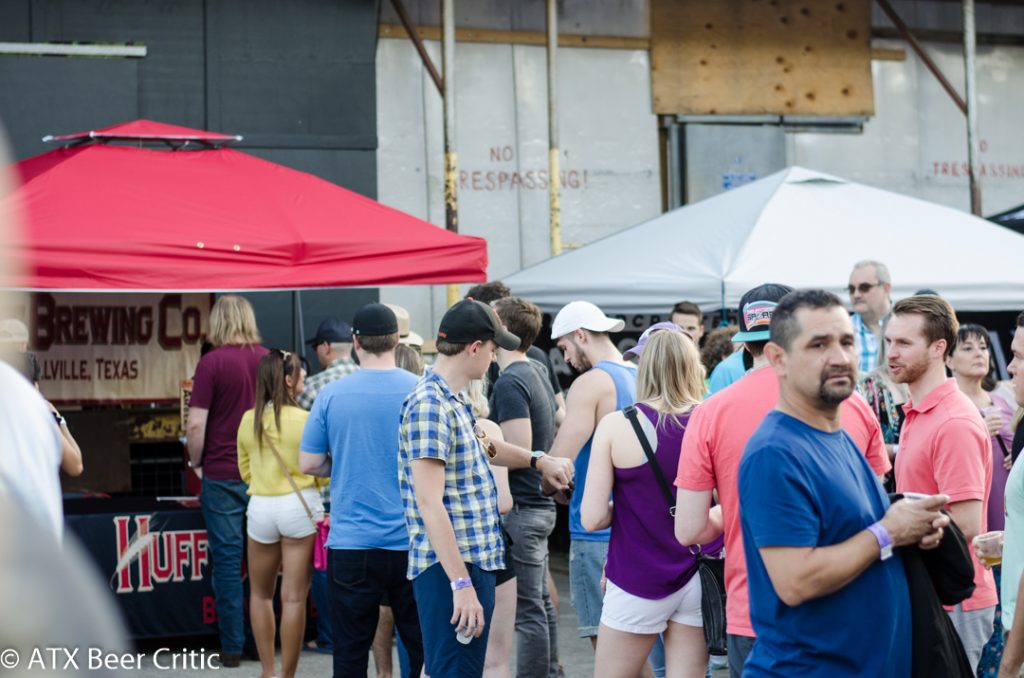 After waiting in more lines, I was disappointed by Huff Brewing and Granger City Brewing.  I’d rank their quality just north of bad homebrew, with some obvious off flavors present.  They’ll need some time to get their sea legs before its worth giving them another shot.  I did find some redemption from Texas Beer Co’s Porter. 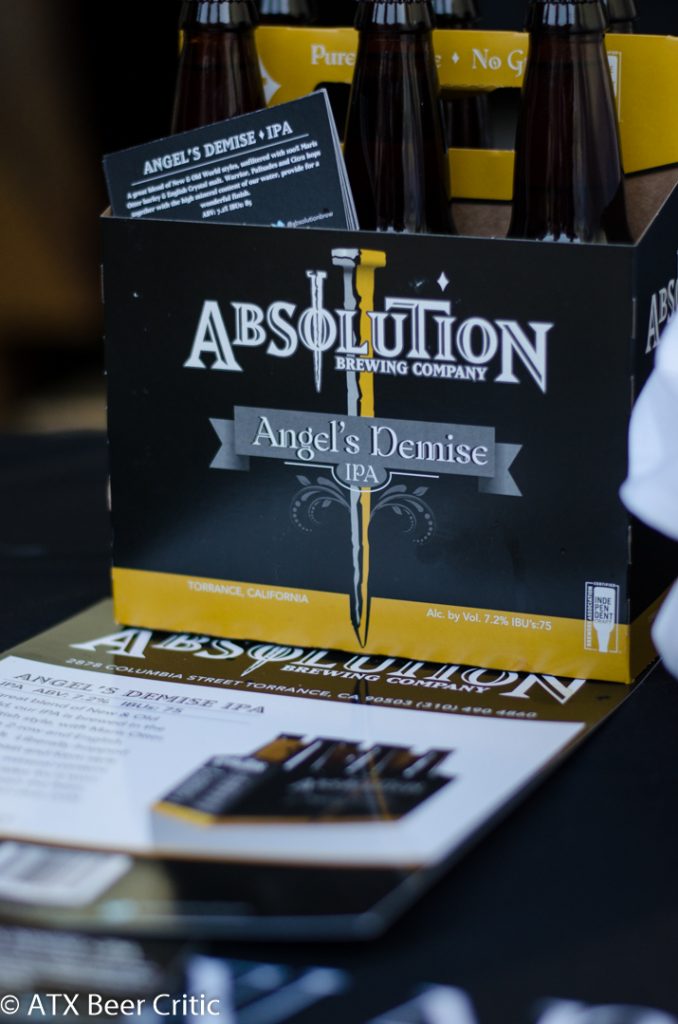 Luckily the sun was starting to go down as 8 PM rolled closer.  I finished my tour of the back lot with Absolution Brewing.  They had just received TABC label approval a few weeks prior.  Their IPA was so-so, but I did enjoy their hoppy red.  To me, their branding came off similar to Alesmith.  I’m not forecasting they’ll be in the Austin market for very long, unless they can identify some niche. 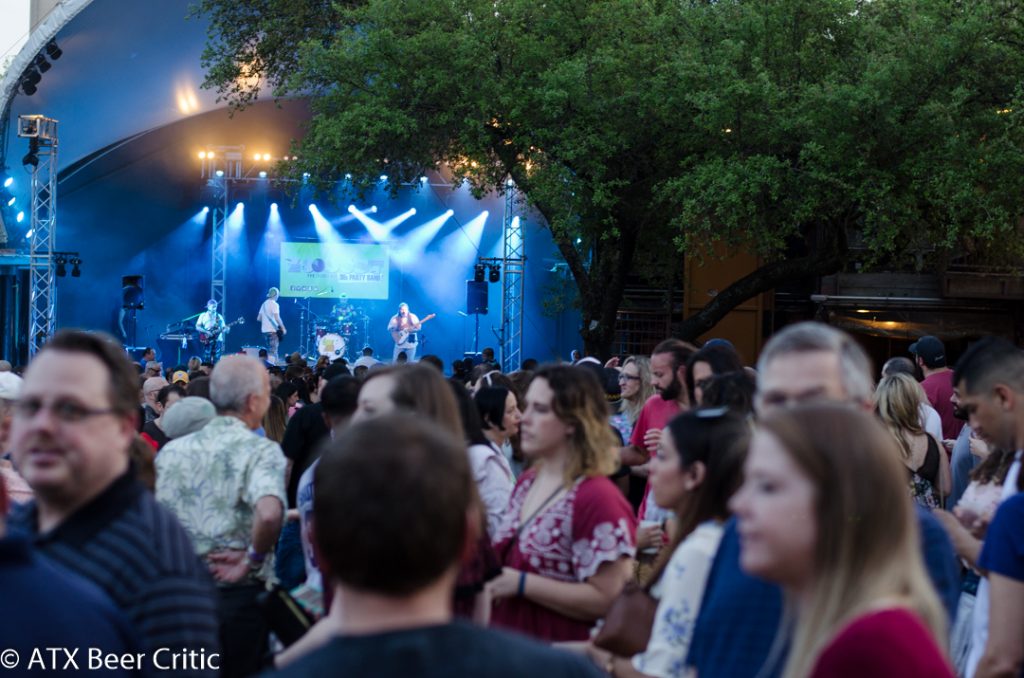 Sick of waiting in the back lot lines, I made my way up to the main area to hear some music and see if the situation was better.  It was not.  I pounded a couple Deep Ellum Dreamcrushers since it seemed to fit my current mood.  I took the time waiting to enjoy the second band for a bit. 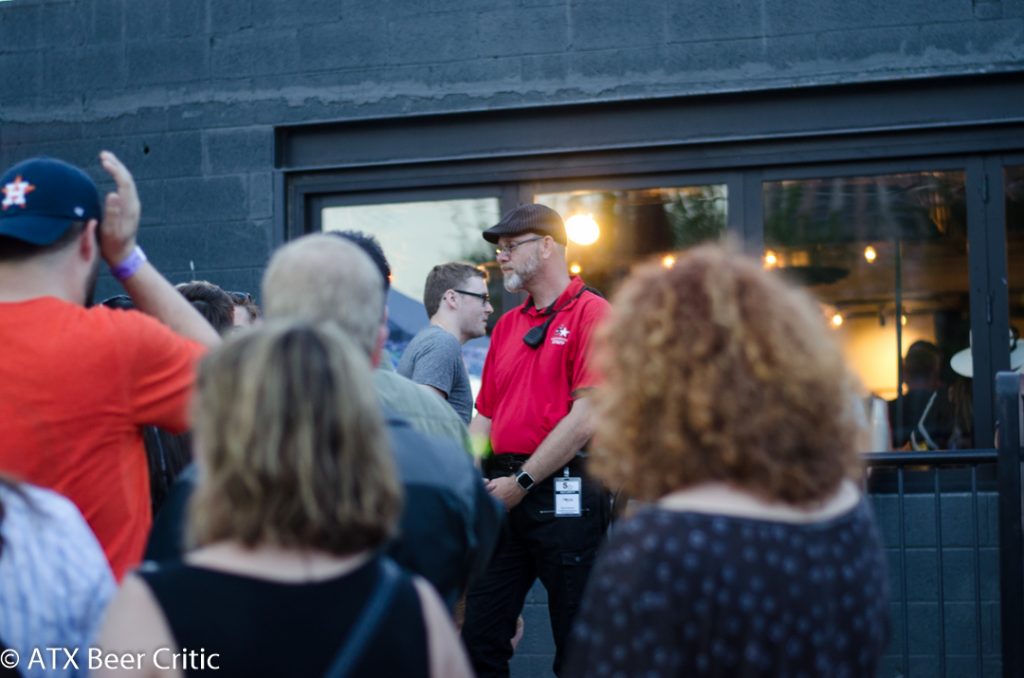 I decided to try the indoor area again, but was quickly greated with an at-capacity, 1-in-1-out, no-fun line.  I gave up with that and went over to Hi Sign.  It had been a while since I visited their brewery and tried their two IPAs.  The Astronaut seemed a bit more refined than the first few batches, less hazy, and smoother.  Their second IPA (name escapes me) was great, and will probably send me to their brewery again to figure out what it was. 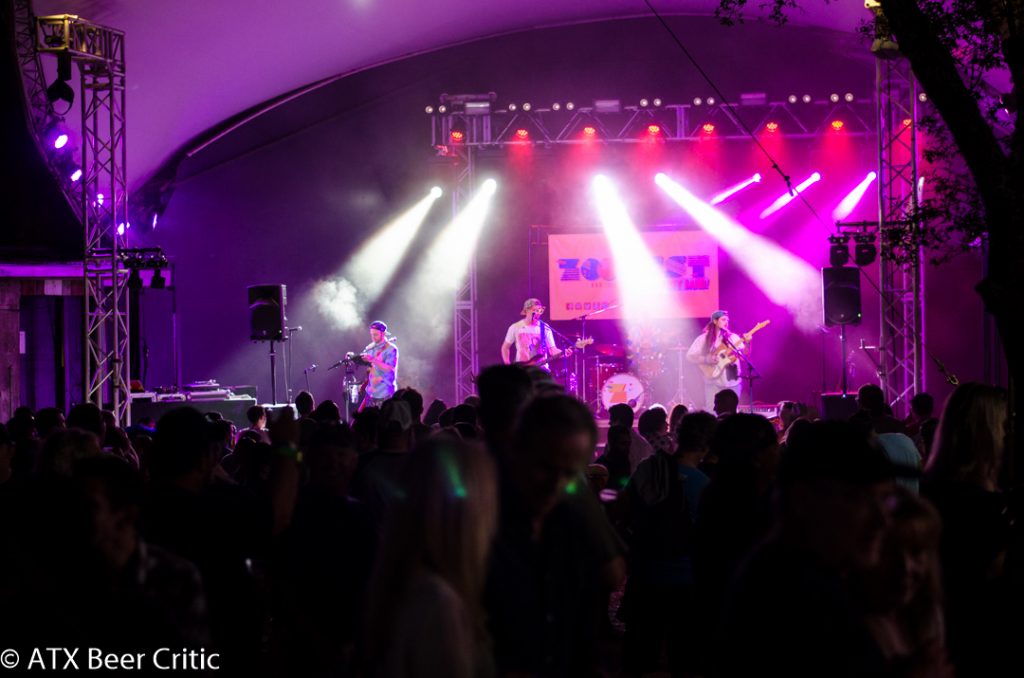 Somehow it seemed like more people had made their way inside as Zoodust, the main act took the stage.  90’s nostalgia oozed forth as they covered all the crowd pleasers.  I had given them a 50-50 odds when reading about the festival, but they were actually really good.  I stayed to hear a few songs, as we learned that using two cups made waiting in line much more rewarding. 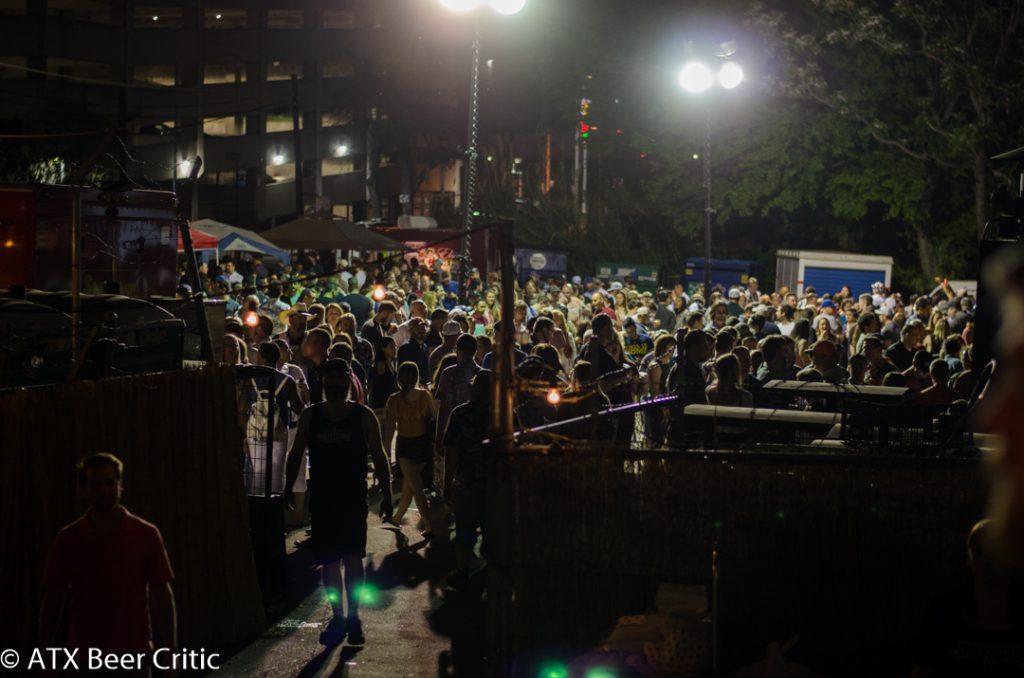 At about 8:45 I headed back down to the back lot since there were a few other breweries there I hadn’t sampled yet.  It was still just as crowded.  I took a quick detour to pee.  As I got to the front of the line, I saw a guy exit a porta potty.  I walked towards the same one, and as I pulled the door open an inch, it quickly was pulled shut.  I repeated pulling with the same result before it locked.  I guess the alcohol slowed my processing of possible gross porta potty shinanangins taking place.   I made sure to use a different one, and headed back into the storm, primed with a story to tell. 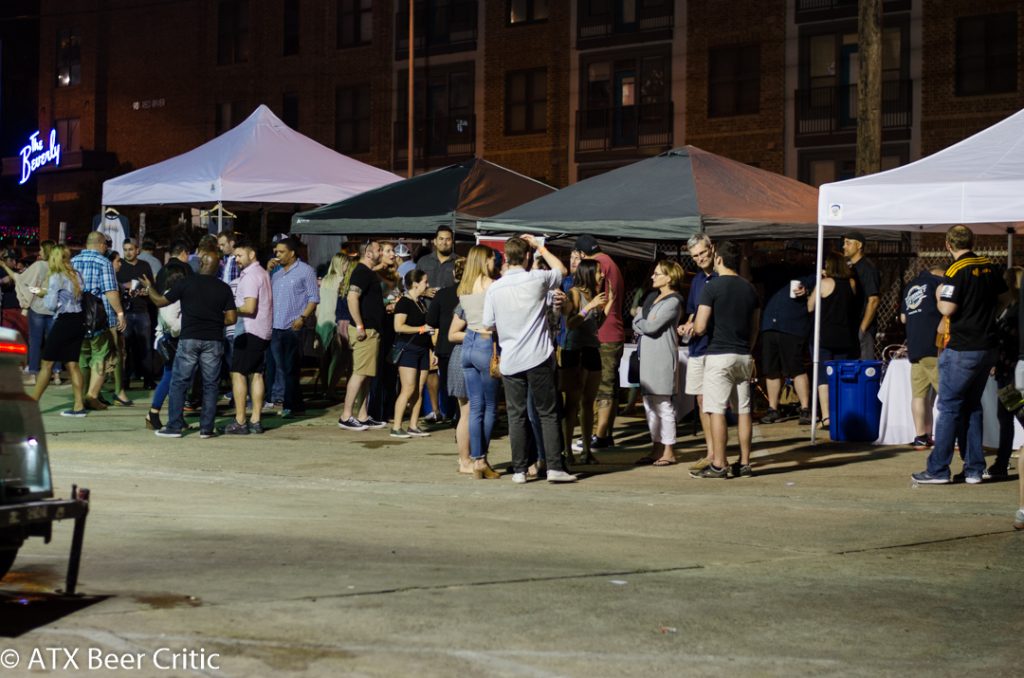 At about 9:10 the back lot began to clear out, as people either started to leave or crowd by the stage for their favorite 90’s song.  This actually became a decent time to chat with a few brewers, as the workers were starting to relax and enjoy the lack of lines.   The food trucks also had caught up by this point, so it was a good time to grab a snack. 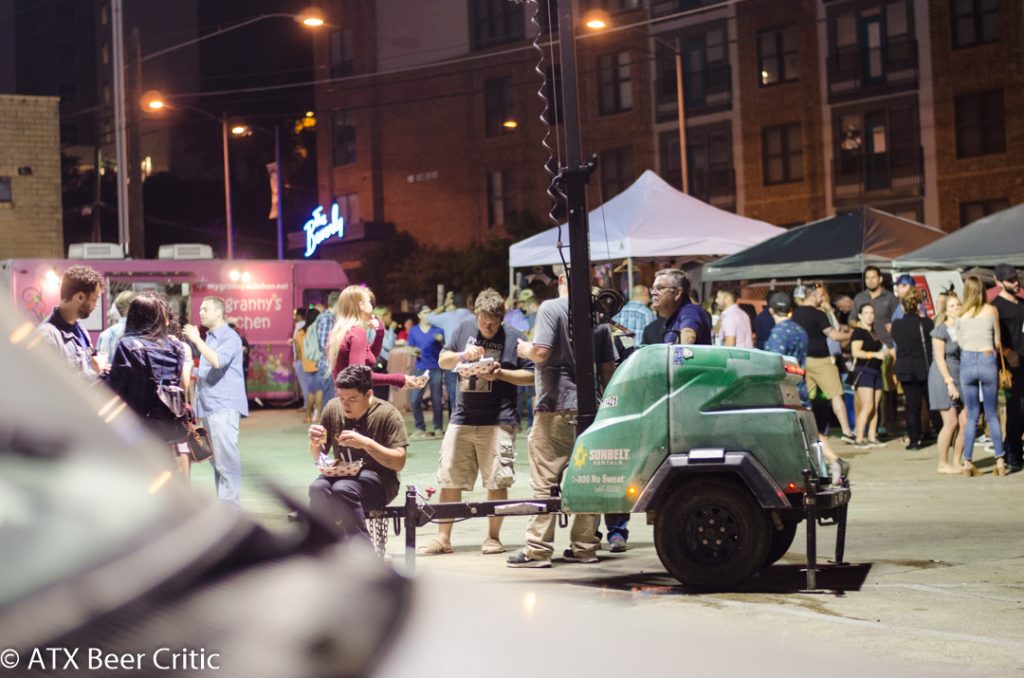 For my last samples, I decided to do a side-by-side of Celis’s Citrus Grandis and NXNW’s Zombie Dragon.  Other people around also decided to join.  While there were mixed opinions, I thought Zombie Dragon was the clear winner.  It’s definitely not a beer to sleep on if you haven’t tried it.    Having had my fix of lines, beer and music, I left the venue at about 9:45.

Real Festival Name:  Drunken Line Fest with a Side of Music

While there was a surprising number of breweries in attendance, it seemed that most of the attendees were there to chug as much beer as possible and get sloshed.  It made sense then that there was maybe 1-2 special kegs tapped, with most beers/ciders being mainstays.

Had I paid $50 for a VIP ticket, I would probably feel ripped off.  The lack of a custom cup, or VIP area as promised, coupled with the enormous amount of lines hardly makes it worth the money.  There were quite a few VIP attendees who obviously felt this way.  At the $20 groupon price, it’s a bit easier to swallow.  Even the $35 GA price is a bit steep considering all of the waiting, with only a short amount of time at the end without lines.  I don’t see how a GA attendee would be able to finish a tasting card.

If the organizers (Rock Star Beer Festivals) host it again next year, I would probably pass instead of paying for tickets.