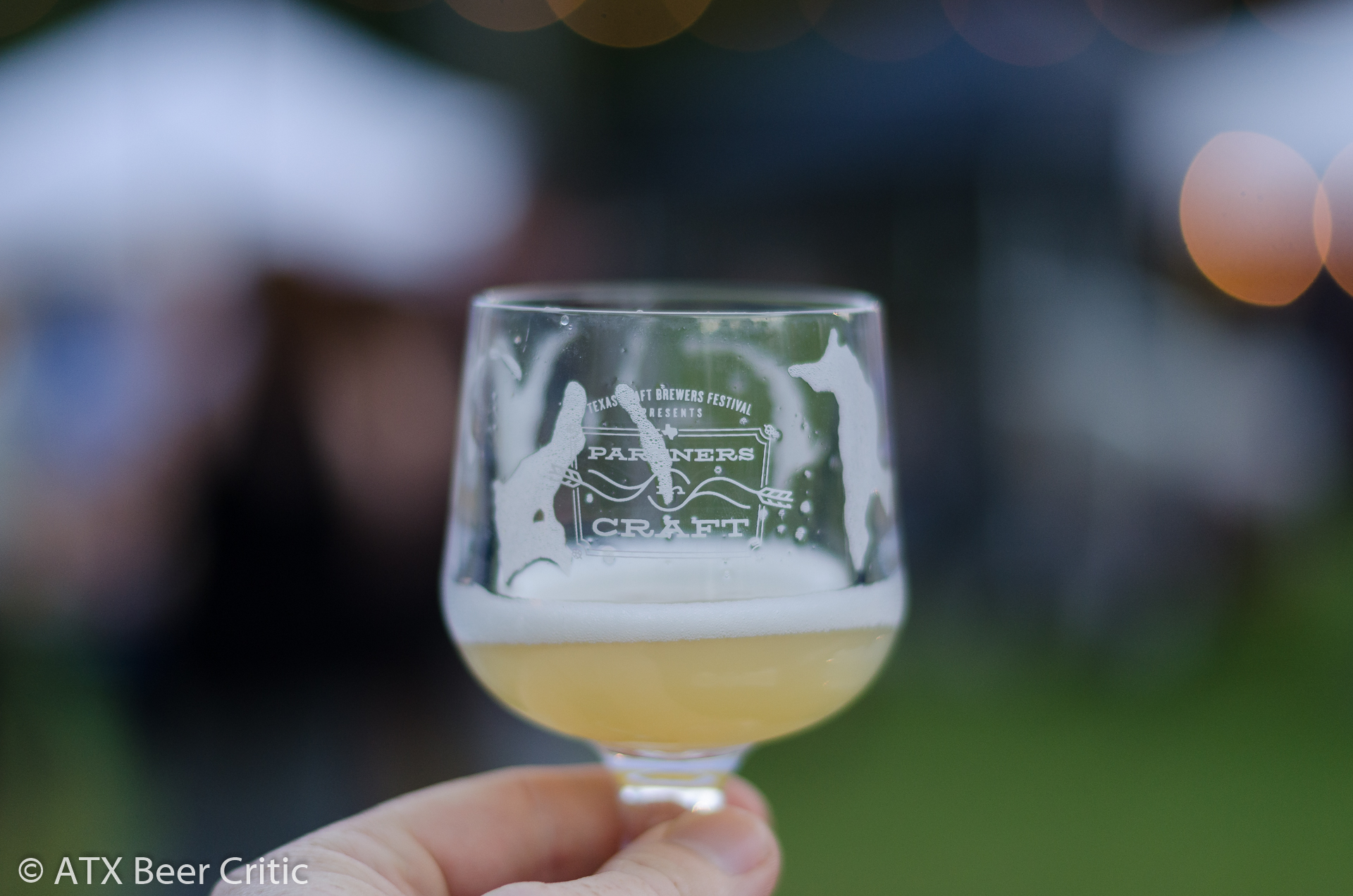 In its second year running, Partners in Craft was a huge success. Happening the Friday before Texas Craft Brewers Festival, it serves as a kickoff event for the weekend. The $55 ticket price might seem a little steep, but it was well worth the price. The limited capacity made for a much more relaxed environment than the festival Saturday.

Lines were never an issue. At most, I waited around 3 minutes for a sample. My favorite beers of the evening were Magic (coffee mixed culture saison) from Hops & Grain, and Norman (Roggenbeir with bread) from St. Elmo.

Food options were plentiful and looked amazing. We ended up trying two kolaches from Batch, and enjoyed them. Hold Out’s burger smelled amazing.

Vendors had some amazing hand crafted wares for sale. It was easy to browse their shops between trying different samples. We did have to seek shelter inside the hall when it started raining, but it didn’t last long. As the night came to a close, only a few of the beers had run out, and the crowd had thinned out by about half.

While I didn’t catch much of Steel Betty, Possessed by Paul James put on a fantastic set. As the event wrapped up, listening to him jam out was a great way to end the evening. I’ll definitely try to catch one of his shows in the future.

Some Tasting Notes from the Beers:

7 Spanish Angels Autumn Ale – Brazos Valley Brewing Company – Collaboration with Independence Coffee Company
7 Spanish Angles is a great coffee brown.  In this case the pumpkin spice mix didn’t overpower the beer, it blended in nicely with the roast of the coffee.  This is how Starbucks should do it.

Black Sparrow Bier – Texas Beer Company – Collaboration with Black Sparrow BBQ
Smoking your own malt is hard.  In this case, I think the beer could have used a bit more smoke character

Bourbon Barrel Aged Off With Your Red – Rabbit Hole Brewing – Collaboration with Acre Distilling – Barrel Aged Imperial Red IPA
This was a huge beer.  No off flavors though, and the strong bourbon and wood character complemented the malt profile well.  12% though and a touch of a palate wrecker.

Cool & the Gang – Blue Owl Brewing – Collaboration with Lazarus Brewing Co – Sour Mild with Earl Grey Tea
This was fantastic.  I’m not too huge on the base beer since I find it a bit astringent at times, but that wasn’t the case here.  The lemony-citric lactic note blended perfectly with the tea character and made this arnold palmeresque.

Et Tu Brut IPA – Austin Beerworks – Collaboration with Holdout Brewing – Brut IPA
This was pretty good.  Loved the hop character in it, with not astringency.  I still think it could be a little drier, with the clarity improved.

Just Hunks – Adelbert’s Brewery – Collaboration with Oddwood Ales – Blended Double IPA
I’m a big fan of this.  Tons of hop character melded with a touch of funk and bit of tartness.  The blending with foudre beer really works well

Magic – Hops & Grain Brewing – Collaboration with Spokesman Coffee – Mixed Culture Barrel Aged Saison with Coffee
Damn this was cool.  The coffee wasn’t overly roasty; it had a more fruity character to it.  It worked very nicely with the base saison.  The wood on the finish just sealed the deal.

Mikey V’s Texas Ex’s Weizenbock – Rentsch Brewery – Collaboration with Mikey V
This had a pretty cool spice profile to it.  The heat and pepper character burned the throat more than the mouth, but didn’t overwhelm the base beer.  It came through on the finish the most.

Nitro Coffee Milk Stout with Hemp Oil  – Zilker Brewing Company – Collaboration with Cuvee Coffee
This beer seems to get better each time I try it.  The addition of the hemp oil added a pretty solid earthiness to the finish.  A really nice beer.

Po-Cha-Na-Quar-Hip  Lone Pint Brewery Collaboration with A local bee farm near Livingston, TX
Didn’t get to try this.

Sorachi Tripel – Southern Star Brewing Company – Collaboration with Channing Herrin
Thought there was a bit too much banana character in the base beer.  Sorachi hopping was pleasant though.

Tejano Coffee – Künstler Brewing – Collaboration with White Elephant Coffee Co
This was fantastic.  Wonderful base beer, and some of the best coffee character of all the fest beers.

Texas Ruby Red Radler – Uncle Billy’s Brewery & Smokehouse – Collaboration with Lone Star Citrus Growers
Not really a fan of this one.  There seemed to be some minor souring off flavors at play.

Wineoceros – Red Horn Coffee House and Brewing Co. – Collaboration with NXNW (Stone Lake)
While the wine notes were pleasant, it seemed to tone down the IPA character.

With Our Powers Combined (Eureka Heights) – Eureka Heights Brew Co – Collaboration with Freetail Brewing Company
My favorite of the two.  The nose on this was fantastic.  Kolsch yeast character worked really well with the beer profile.

With Our Powers Combined (Freetail) – Freetail Brewing Company – Pub – Collaboration with Eureka Heights Brewing Co.
The Witbier yeast character was a bit too strong in this for me.  It overpowered the rest of the beer a bit.

Yellow Circles – The Brewtorium – Collaboration with Red Horn Coffee House and Brewing Co.
Really solid example of a beer style more people need to brew.  I could drink this Altbier all day.

Didn’t get to try this.

Didn’t get to try this.